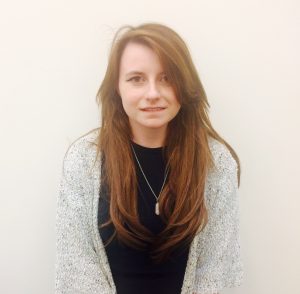 We are delighted that Year 13 UTC Swindon student, Kate Kerrane, has been offered an apprenticeship with the Royal Navy.

Kate’s family has always worked with the Royal Navy, which sparked her interest in joining the force several years ago. She originally applied for a job, but when they saw the qualifications she was working towards they put her through a test to see whether she would be more suited to the apprenticeship scheme instead.

By completing an Aviation Engineering Apprenticeship, Kate will gain a Masters qualification after three years rather than 22 years if she were to join as a Regular.

Kate said: “I will spend 10 weeks at HMS Riley, which is normal for a Regular, then I will go to HMS Collingwood for 18 months where I’ll be learning about all the different parts of helicopters, fixed wing, rotary wing etc. I will then go on deployments and start working through a course, before I’ll have to take charge of a group.

“It’s all very hands-on and practical, which I like. I don’t mind theory and there is some of that, but it’s more focused on the practical side which is more suited to me.”

Commenting on her time at UTC Swindon, Kate said: “I’m definitely glad I made the move to UTC Swindon from my old school. I used to have no confidence at all, but this has dramatically improved. I also didn’t used to do very well academically, but we’re given lots of independence here and having more independent study time has really helped me focus and improve.”

We wish Kate the best of luck.